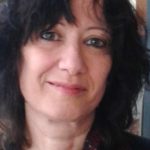 Marilena Maniaci was born in Rome on June 25, 1965. She obtained a first-class honours degree in Literature (Greek Palaeography) at Rome’s Sapienza University, and went on to secure a Ph.D. in Palaeography at the same seat of learning. Since 2005, she has served as a Full Professor of Palaeography at the University of Cassino and Southern Lazio, where she previously worked as a researcher (1998-2005).
At her university, Marilena Maniaci has occupied several key positions within the institution, including that of Head of the University Library System (2005-2007), Vice Rector for Research and Competitive Projects, with responsibility for the coordination of Ph.D. research, and Deputy Rector. She has presided over many commissions and working groups, addressing matters such as research, teaching and open access issues.
Since 2000, she has been part of the Literary and Historical Sciences in the Digital Age doctoral research teaching body (also its previous forms) at the University of Cassino and Southern Lazio.